Gimme Delta: Why we need to bring back lockdown

Professor Kelvin Knox makes the case for a return to lockdown

It’s four in the morning and you’ve hit snooze on your alarm for the seventh time. As you lay in your rickety Ikea divan bed, eyes wide open, you contemplate the day ahead. The knot in your stomach grows. It feels like Geoff Capes has plunged his arm up your anus and has a solid grip on your intestines. Just one more snooze. One more or you will be late for work.

With a sigh, you finally muster the energy to get up. At first, your pert 36C breasts wrestle with the satin sheets, but they finally accede to your demands and allow you to hop out of bed. As you hit the light switch, you catch a glimpse of your slim, athletic frame. By all means you are an alabaster goddess, but you certainly do not feel it. Instead, you are exhaustion personified. A deflated balloon.

A wave of nausea hits when you realise your shift at the ICU starts in but forty minutes. No time for breakfast! You snap on your suspender belt, slide on your silk stockings, and wrestle yourself into your nurses’ uniform as you run down the stairs.

As the crisp morning air hits your elegant brow, your mind races back to that glorious time. It’s a warm May evening in 2020, and your neighbours have lined the avenue armed with pots and pans, acme whistles, vuvuzelas, and party streamers. At the stroke of six, the air fills with that intoxicating din of hand clapping and cheers.

As you step down your front driveway, your ample chest swells with pride. It is you they are applauding. It is you! Wonder Woman? Pah! Supergirl? Pshaw! You are the new superhero.

As you open the door to your baby pink Fiat 500, two men in blow-up sumo wrestler outfits come running down the road. Ha ha! What a sight! Right now, you would gladly work for free! This was worth a thousand per cent pay rise. In fact, it would be a slap in the face to these fine people if you were to ask for one.

But this isn’t 2020 anymore. It’s 2022 and the streets are silent. All the young girls want to be Wonder Woman again, or the CEO of a FTSE 100 company. Why do you bother? Why? You look at the pocket watch dangling from your perfect breast and turn around. You quit. No more. Never again.

Up and down the nation this scene is being played out. Medical professionals are quitting in their droves because they simply are not valued. The scumbags of the general public have a very short memory indeed.

If we do not stem the tide, and fast, we are in danger of losing up to seventy per cent of frontline NHS workers. If you were to place them end-to-end, this amount would stretch from Timbuktu to Moscow. In terms of double decker buses, you could fit the corpses of these NHS heroes into seventy thousand of the iconic red vehicles. 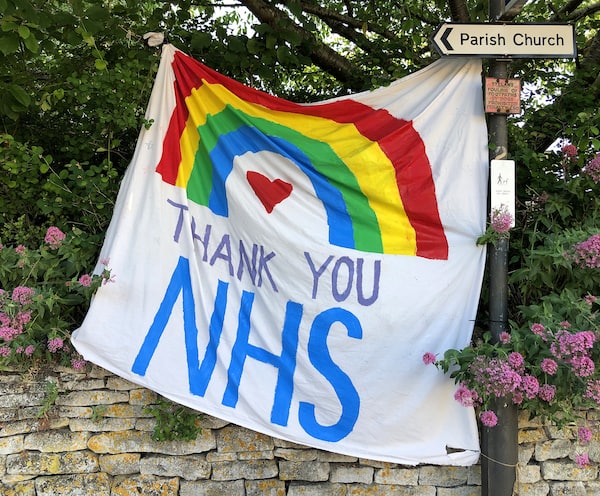 "Then, when the time is right, I would invite Gary Lineker to press a button that would send a deadly electric charge into the watery stadia."

That’s a heck of a lot, let me tell you!

So what is to be done? How can we stop the NHS from completely imploding? The solution is staring us right in the face. FULL LOCKDOWN.

Now, Kelvin, I hear you say, why on earth would we want to go back to a state where the lonely and vulnerable are all but cut off from the rest of society, where the poorest children are left behind in the digital classroom, and where people are too afraid to check out that bloody stool or that lump on their breast? Are you insane, Kelvo? We are nearly back to normal!

To you I say this. You are a dangerous, selfish little worm. If I could get hold of you, I would smash a wine bottle and thrust the jagged edge into your gullet and twist it so your Adams apple popped out. I would then drag your carcass to an overpass on the North Circular and dump your wretched little body into the path of an Eddie Stobart truck.

And then what, Kelvin? Well, I would unzip my chinos and send a stream of hot golden piss onto the disgusting mess of Dolmio that used to be your body.

Why do you think you deserve to be free? You. The British voter? You voted for Brexit, didn’t you? You STOLE Erasmus from an entire generation of university students. You’ve made the import of tomatoes from Spain that little bit harder. You’ve turned our once tolerant nation into a racist cesspit. Lockdown? You’re lucky to even get that!

If I had my way, I would round up every single Brexit voter and place them in all the football stadiums in Britain. Each one would then fill with water. Not too much. Just enough to cover them up to their knees.

Then, when the time is right, I would invite Gary Lineker to press a button that would send a deadly electric charge into the watery stadia. If anyone survives, the boys of the Special Boat Service will wade in armed with hunting knives and will pull the viscera from the bellies of all of our enemies.

We were happier during lockdown, were we not? With all that leisure time we had a chance to ponder on the things we truly value. For some of us it was getting fit, others picked up an instrument they abandoned, or they took up painting, maybe they made contact with an old friend they hadn’t seen for years.

I didn’t get that chance. I accidentally found myself in Tuvalu – a tiny island nation situated in the middle of the Pacific Ocean – to dispose of a ‘problem’. When I had myself posted back to England, I must have filled my container to the brim with excrement. It was a true disaster zone. My survival was a miracle. But it was the only way.

But what would I have done if I was at home for lockdown? I have thought about this a lot. But I can’t think of a better answer than to reacquaint myself with every single inch of my darling wife Moomoo’s exquisite body.

As we sped off in my Volvo 960, the glow of the blues and twos in my rear-view mirror only served as a further aphrodisiac. Moomoo straddled me as we travelled at 110 mph down the M4 and forced her hot velvet purse onto my eager member. Despite this, I still managed to keep a textbook ten to two steering wheel position.

Thanks to Moomoo’s father, who was the Chief Constable of the Gloucestershire Police at the time, our sentence was quite lenient. But my god was it worth it.

Yet you want to deny me this? You! You selfish anti-vaxx buffoon! You say you want your freedom, but the only time you will really be free, when you can touch the face of God, is when you experience that intoxication of orgasm with someone you love.

So join me, ladies and gentlemen, in lockdown. Do not return to your office. Do not take off your masks. Do as I would do. Sneak into the garden of someone you know and have at it.